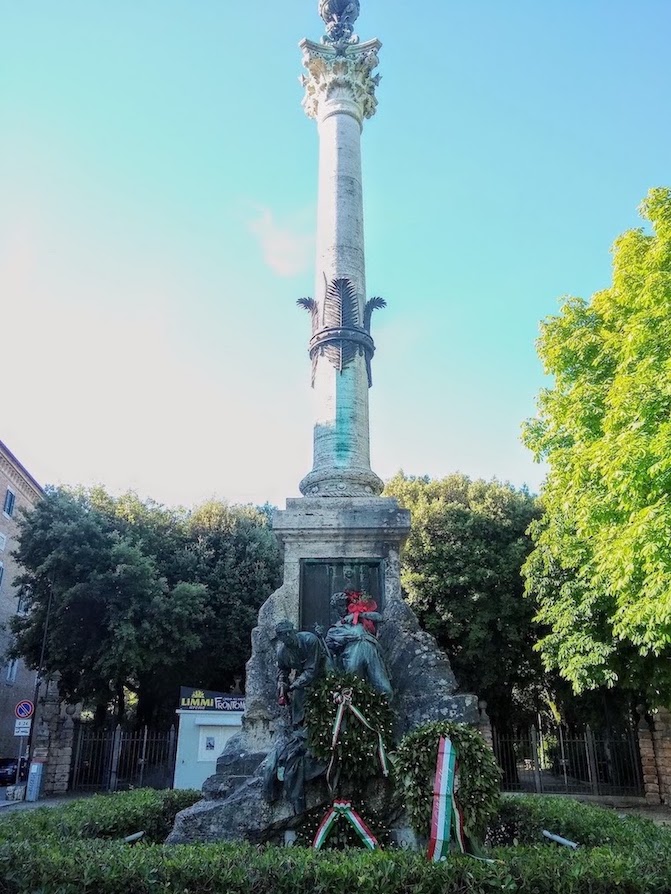 A little over a week ago Perugia took time as they do every year to remember. June 20th is a date forever etched in the history books here in Perugia. Her history is full of battle, warfare, and sadly, a great deal of loss at the hands of oppressors spanning from the days of Augustus Caesar all the way to the Fascist regimes of Mussolini and Hitler. Every year the city gathers to celebrate and remember June 20th for two reasons.

The first is a tragedy that certainly hardened the hearts of many and has left an indelible mark on the city, the results of which are still seen today. In the middle of Italy’s struggle for unification, Perugia found herself in the crosshairs. The city had long been the heart of the papal states (a strategic city and region ruled by the pope) and wanted to join with the rest of Italy’s unification plan. Rebellion grew and Perugia successfully ran the pope’s regime out of town. But the insurrection didn’t last long, on June 20th, 1859 the troops of the Swiss regiments sent by Pope Pius IX returned and attacked the citizens who had rebelled against the papal rule. While the actual fighting led to few casualties, it was the aftermath of the army’s victory that is forever remembered. The pope’s army proceeded to dominate the citizens, loot the city, massacring her people. This would became a tragedy remembered and commemorated throughout the years through art, poetry and even stone. Today, a monument forged by Giuseppe Frenguilli stands in the place where much of this massacre took place.

The second reason this date is significant is that it commemorates the day the Fascist’s were forced out of town and the city was liberated by the Allied forces. Every year the city hangs a wreath on a plaque outside a shooting range commemorating this victory and at the same time remembering the loss of those “freedom fighters” within the city’s walls that were lined up at the range and were killed by means of firing squad at the hands of the Nazis.

Tragedy. Loss. Death. Take a walk around most cities here in Italy and you’ll undoubtedly see monument after monument. The monuments of our cities are erected to tell stories; some tell stories of victory, some of loss, and still others of oppression and despair. The monument of XX Giugno is one of loss mixed with hope.

As I walked the streets a little over a week ago seeing the sights of commemoration I was reminded of a quote by Giuseppe Frenguelli when asked about the meaning of his monument. He simply responded, “It represents the yearning for the freedom of Perugia.” These moments in Perugia’s history celebrate an admiration for courage, an aversion to cruelty, and a distrust of the oppressor. This date represents something deep within the psyche of Perugia life: the desire for freedom from oppression.

Over the years the history of Perugia’s suffering at the hands of oppressors has caused a hardness to take hold, and understandably so. As we’ve learned more and more about this place and her history our hearts are broken. Often we’ve not known how best to pray or care for the city the Lord’s brought us to. Often when praying for a city, for a people, for a place we look for Kingdom values to bless. Some cities admittedly make it more difficult to find those values as they’ve become hidden underneath layer after layer of violence, death, loss, unresolved grief, bitterness and so much more.

As we commemorate, remember, and celebrate Perugia every June 20th, the Kingdom cry for freedom is brought forth from the very lips of her government officials who adorn these places with wreaths. This. Is. Good. It is the freedom from oppressors that Jesus promises, for the Kingdom is at hand!

Our prayer is that Perugia would kneel before the King and place itself squarely under His reign and rule, so that the Kingdom of heaven would come more completely and fully and meet her desire for freedom with the abundance and generosity of the King.

May the Lord bless and set Perugia free.

Get Up and Eat…

On Waiting and Sorrow